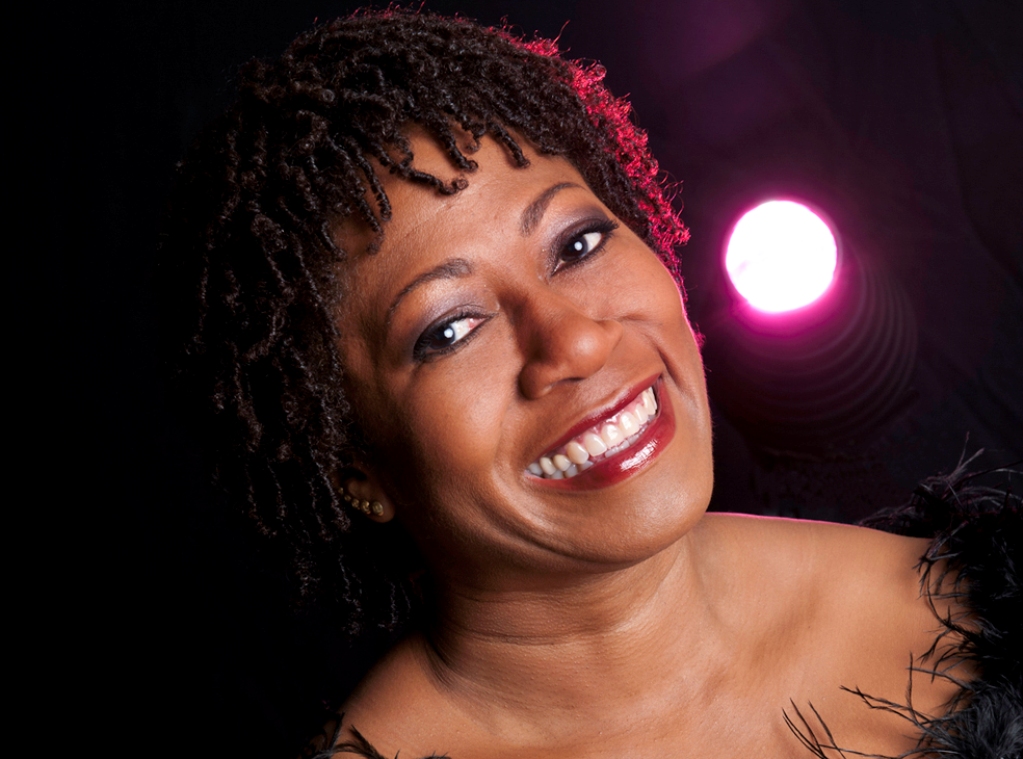 Colijn: Today I listened again to your CD “Gedicht Gezongen” [“Poetry Sung” – ed.], and I noticed how much actually is on there and how diverse. And you are working on the sequel now?

Denise: Yes I am working on the second one now, but I don’t know if I will get it as full as this one. Also timewise, this one is about 73 minutes. I didn’t want to have to choose, I just had all these poems – and the music. For example 5 to 6 pieces by Vasalis, that was because I was asked for the literature festival ‘Spraakmakers’ in 2002 here in Utrecht. I started to do this in 2002; that year took a flight – everything having to do with literature or poetry I was asked for. Then I received the request to come and sing 20 minutes of Vasalis. And that were these poems. Someone said to me: “With this you can make 2 CDs!”

Yes, they are all in different atmospheres. One person said: “Oh nice miss Jannah, poems on Jazz.” And I said: “It’s not all Jazz per se, it will be what it will be.” I don’t decide in advance what kind of music it becomes.

Colijn: How did you compose the music, was there pressure by for instance a deadline?

Denise: It went very gently, it started end of 2001. I was in South-Africa, when Hans Beers called – my manager at the time – that a booking was received for literature festival ‘Winternachten’ [Winter Nights] at The Hague. With the request if I could perform four poems, meaning that I had to write the music to them myself.

That put me on this path and that’s what I feel is the interesting thing about all of life. That you get always new impulses – and many times from outside of you. Never before I had thought of putting poetry to music.

You also have to àsk, and that is very important. I had mediated a bit and said a prayer in which I asked if I could be a ‘channel’. Asked for the inspiration and to handle it well and with integrity. Not coming from personal vanity like ‘Look at me!’. But I knew I had to really start out from the poem and to convert that to music. But stay as close as possible to waht the poet would have meant and/or felt. Then I just knew, you have to ask for it at the very beginning and then it will unfold.

Colijn: Is there a difference for you with what you yourself are looking for? Do you have something like: “Thát is where I want to go with my music!”?

Not per se. I found out for myself that I very much like to go with the flow. I just follow my feeling. Something can today come out one way and today another way. I’m not panicking anymore if something has changed the next day. In the beginning you have insecurities, I was a bit insecure. The conservatory has been good for me, but I came there and suddenly had to analyse and identify everything that previously was completely clear for me. If it was listening to the sound I could follow it, but verbally.. Then one time I put Imagine to music, written down what I heard in my head. If you sing what you mean, then it’s always correct.

Kim: By whom have you been inspired?

Denise: I’ve been inspired by so many people. I’m from a very musical family, we sang along everywhere. In church – my father was a vicar. You could better say: by whom have I nót been inspired.

The radio in Surinam plays still a lot of old soul music. There are almost no conversational programmes, but mainly music. From my childhood years I can remember that there was a programme with ‘Dutch Hits’. Also you had gospel, éverything you could hear on the radio in Surinam, and still.

And then you had classical music, where we had to be silent. With other music we sang along and acted crazy. I come from a family with four sisters: we sang everything in parts. Because of my musical background I can anticipate really well now. That’s also true of my sisters – without conservatory education.

It was very good for ear training, while playful.

Two roads away they sometimes threw a party so that you could hear their music. So then we went to stand on the balcony and guessed which song it was. The challenge was to be the first to find the right title. Really a perfect training..

ELLA!, a new show about the legendary singer 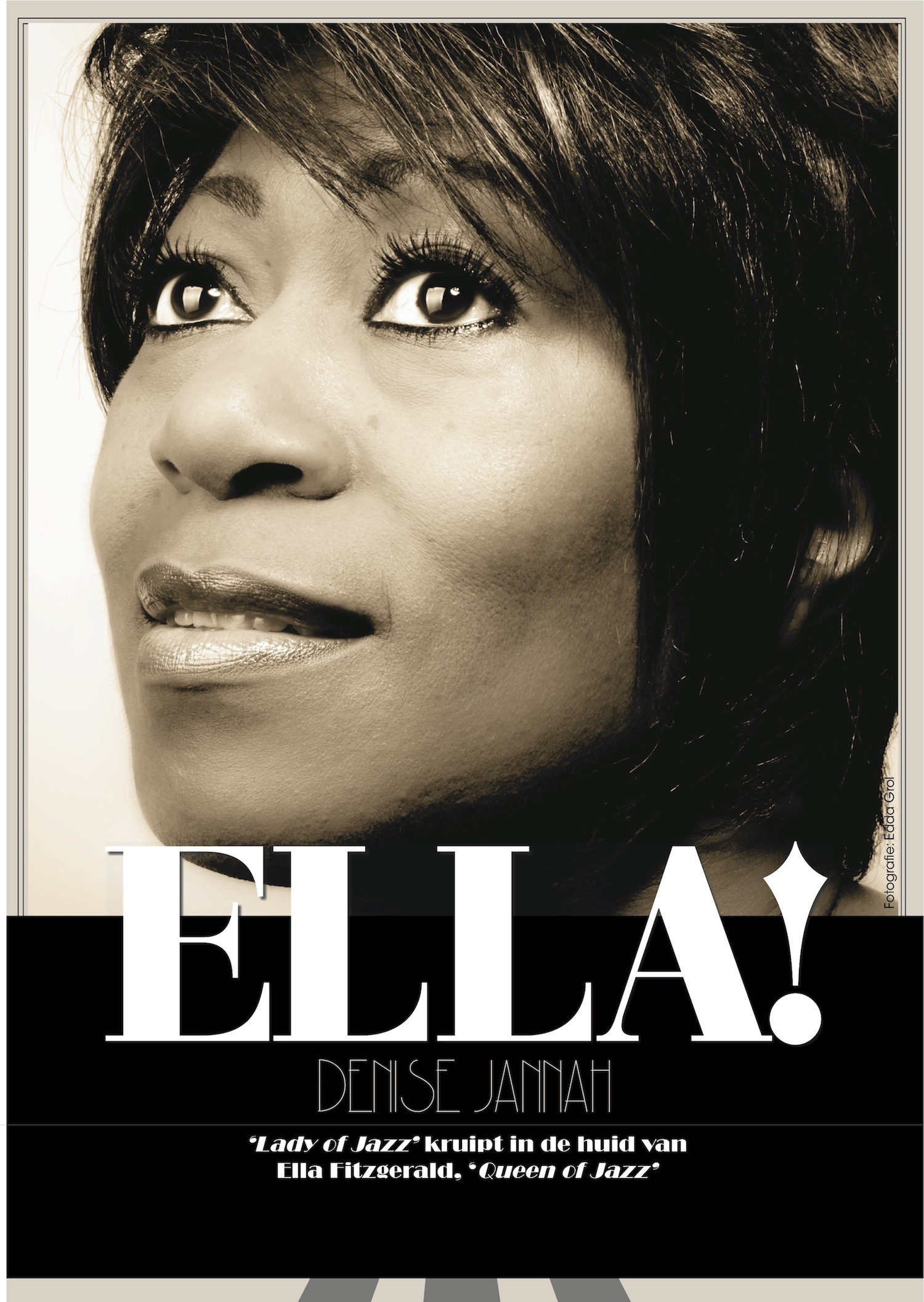 I feel something in common with Ella, not even only musically, but also regarding a few photos that you see of her. Middle-aged she resembles my grandma of my mother’s side. And Billy Holiday in her good years, with that flower in her hair and a beautiful white long dress, that is my mother. So with those two ladies I have something extra, something familiar in a certain way..

ELLA! in the theatres season 2014 / 2015 : look on Denise Jannah’s concerts page and scroll to the dates of october, november and december.

For the complete interview, and much much more music: become a member of our Online Music Magazine – value 4 euro per month, but ONLY THIS MONTH still for introductory price 2 euro per month!!
The Colijn Buis ONLINE MUSIC MAGAZINE – articles, interviews and above all a lot of fantastic music!!